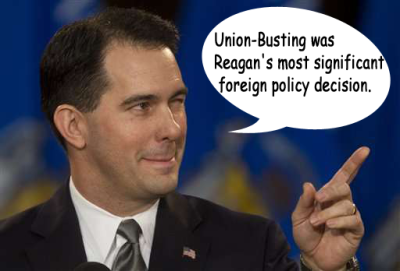 In a courageous act of self-involved hubris, Scott Walker recently provided us with a glimpse into the mind of the “real conservative” who would be king. Addressing the international terrorist issue, Walker declared, “If I can take on 100,000 protesters, I can do the same across the world.”

Sounds like the Governor is suggesting that his union busting tactics qualify him to lead the fight against an army?

Outstanding! So, the key to defeating International Terror Organizations is to decertify them and cut their funding? Maybe, not allow them to collect dues and make them pay for extra police when they peacefully protest!

The oddest aspect of this notion is that this anti-government lifetime government employee actually believes his own BS. Kind of scary, hey?

Fellow Americans, we in Wisconsin humbly apologize for unleashing another right wing whack-a-doodle upon an unsuspecting nation. Sorry, sometimes we get a little crazy up here. Here’s hoping he does little national damage while providing some quality entertainment.